This article is a stub. You can help 86 - Eighty Six - Wiki by expanding it.

Vladilena Milizé (ヴラディレーナ・ミリーゼ,, Vuradirēna Mirīze?), more commonly known as Lena by her friends and as Handler One to her subordinates, is an elite Republic commissioned officer who rose to the rank of Major at the young age of 16.

She was later promoted to Colonel at the age of 18 and was sent as the Republic of San Magnolia's representative for the Eighty-Sixth Strike Package, of which she is the tactical commander.

Lena has the silver eyes and hair of a Celena. Lena typically wears the Republic Army's Prussian blue and white female dress uniform. She also wears various dresses, ranging from an old-fashioned silk gown she wears within her family's estate to a black evening dress that resembled mourning clothes at the Lune Palace.

After the departure of the Spearhead Squadron, she dyes a streak of red into her hair to remember them, and begins to wear a black-colored form of the dress uniform.

She later reverts back to the standard uniform and would remove the streak of red, as requested by Shin.[4] During the Strike Package's stay in the United Kingdom of Roa Gracia, she wore a white and blue coat above her uniform.

Lena was born into the former noble household of Milizé. After an encounter with the Eighty-Six outside the Eighty-Five Sectors when she was 10, Lena dedicated herself to becoming a Handler to assist the Eighty-Six on the frontlines. Her determination resulted in her skipping multiple grades, graduating at the top of her class, and becoming a major at the young age of 16. In the military, she has a reputation for effectively leading the Juggernaut squadrons. She has excellent tactical ability and can analyze combat data to determine the Legion's reinforcement rates.[11]

Lena exhibits a disregard for social opinions she deems immoral or useless. Despite taunts and jeers from other Handlers who dislike her close relationship with the Processors under her command due to their belief that they are traitorous sub-humans, Lena maintains her daily communications and puts in an effort to develop closer bonds with her squadrons.[12] She remains steadfast in her opinion that the Eighty-Six can no longer be viewed as traitors due to the Giadian Empire having assumed to have fallen.[citation needed]

Her mother's focus on social status and bloodlines, as well as the insistence—that, as the daughter of the Milizé family, Lena should resign from the army and marry another noble—are disdainful to Lena. Lena believes that the war is far more important than trivialities regarding marriage and social standing. Such ignorance towards the war from citizens of the Republic annoys Lena, who has witnessed the cruelty that allows the people of the Eighty-Five Sectors to maintain their lifestyle.[8]

Lena's sheltered upbringing and her isolation from her peers due to her rapid advancement to become a Handler have resulted in her being naïve. She believes that she can spout her outlandish ideals to the Republic without the fear of her punishment.[13] Lena can also be authoritative when necessary and can use unscrupulous methods—such as guilt-tripping, bribing, and using physical threats—to achieve an objective.[14][15] Though she is educated in social etiquette, she lacks friends besides Annette because she has outstripped all other peers in terms of education. At the same time, her noble lifestyle gives her no chance to learn basic skills such as sewing.[16]

Within the Republic Armed Forces, specifically their headquarters of Palace Blancneige, Lena gained a reputation of being a "drone loving princess" who cared too much about the Eighty-Six.[17] Other officers would often mock her for her strange ideals and view of the world. Once Lena began to act upon her ideals and inconvenienced the other officers, the mocking slowly turned to resentment. She was said to be someone who couldn't differentiate between human beings and livestock, or an idiot who threw away her rank to help the Eighty-Six.[15] Despite that, the other officers couldn't touch her so long as her uncle protected her.

Lena would become known as an effective leader during the defense of the Republic, rallying together the Eighty-Six under her in the interest of mutual survival. Even before the large-scale offensive and the fall of the Gran Mur, she managed to gain the respect of the Processors under her command through effective leadership and her artillery support hitherto unused by the Republic. Her leadership was highly demanding to her Processors, leading them to come up with her moniker and later Personal Name of Bloody Reina. Lena is fond of the name as a form of self-deprecation, as she feels that she is stained by the blood of the Eighty-Six she has sent to die by her orders; ironically, her squadrons have the lowest fatality rate.[1][15]

Once she joined the Eighty-Sixth Strike Package, the Eighty-Six regarded her with a fair amount of respect despite her being an Alba. She would be endearingly regarded as the "Queen of the Eighty-Six", especially by the Spearhead and Brísingamen squadrons.[18]

Lena was born on July 12th in the Republic Year 351. Her father—Vaclav—described her as independent and observant as a child, learning easily without being taught.

When Lena was 10, her father took her to see the Eastern Front's front lines in a Republic scout plane. Cruising above the desolate concentration camps, layers of minefields, and the ravaged battlefields, Lena had her first experience witnessing the Eighty-Six's hardships. While the Legion was known to have potent anti-aircraft weapons called Stachelschwein, Vaclav knew that flying at night would greatly reduce the chance of Legion attacks, as the Legion's auxiliary power systems were dependent on solar power. However, a stroke of bad luck resulted in a patrolling Ameise unit spotting the plane and directing anti-aircraft fire from towards it. Struck in the left engine, the plane was forced to crash land, killing Vaclav. The Ameise approached the plane's burning wreckage but was destroyed by a Juggernaut piloted by Shourei Nouzen before it could attack Lena. Shourei rescued Lena and brought her back to his squadron's base. While he forbade her from interacting with the rest of the squadron out of fear that they would harm her for being a Republic citizen, Shourei spoke with and entertained Lena until she could be returned to the Republic. His conversation with her about fighting the Legion to prove himself a citizen of the Republic and return to his younger brother profoundly affected Lena.[19]

Once Lena returned to the Republic, she resolved to become a soldier to help Shourei and the other Eighty-Six fight for their freedom. She was able to skip multiple grades and enlist in the Republic Army. Placed in the 91st Group for training, Lena was the youngest of the trainees. Her diligence in her work earned her significant recognition, and she became the first of the 91st Group to be promoted to the rank of Major at the age of 16.[8]

Lena was asked by her superior and her late father's close friend—Jérôme Karlstahl—to take command of the elite Spearhead Squadron after the previous Handler resigned. The Spearhead Squadron was an elite unit consisting of veteran Processors assigned to the battlefields with the heaviest combat. The squadron's infamous captain—Undertaker—was rumored to be the cause of a Handler's suicide. As no other Handler would volunteer for the role, Lena would take the assignment out of a sense of duty, despite Karlstahl giving her the option to refuse.

She resonated with the Spearhead Squadron for the first time on May 22nd RY 367; while she couldn't be of help on that day's battle, her initial suggestion of where the squadron should be deployed was noted to be a competent answer by Wehrwolf. She continued to check in on the squadron nightly and engage them in conversation. While Lena genuinely saw these nightly Para-RAID synchs as her way of humanizing the Processors, the members of the Spearhead Squadron saw it as a way to kill time, merely superficial niceties.

With the intention of fully supporting the Spearhead Squadron, Lena spent her time researching Legion formations and reinforcement rates, as well as finding a map of the Eastern Front's First Ward.

Relations between her and the squadron would sour after Kirschblüte's death on June 15th. She was severely berated by Laughing Fox for even thinking to give words of mourning to the squadron, as he considered that—in the heat of the moment—she did not have the right to do so as one of their oppressors. Without realizing, Lena had made Kirschblüte's death about Lena's failure, putting the focus on herself instead of their deceased comrade. She also still adheres to the prejudices implanted by the Republic subconsciously, never even considering to refer to them by anything but their Personal Names. She disconnected from the resonance once requested by Wehrwolf, after which she would have time to reflect on her world view and ideals. Even with Annette and Karlstahl's dissuasion, her conviction to help the squadron remained firm.

She nervously reconnected with Undertaker later that night, apologizing for her behavior and requesting for the names of the squadron's members. Sensing that Lena was eager to prove herself once more to the squadron, he gave her a chance and introduced his comrades' names to Lena one by one, also telling her about his promise to carry the tags of his fallen comrades. With his help, she would manage to repair their relationship and set a true foundation for their interactions moving forward. Undertaker would eventually introduce himself as Shinei Nouzen, to which Lena would ask if he was related to a Processor by the Personal Name of Dullahan—Shourei Nouzen. He confirmed that Shourei was his brother and told her of his death five years ago. He admits to Lena that he does not have any plans once he was discharged, only that his current goal was to search for his brother. Lena was confused by what he had meant, but Shin simply deflected.

Shin was the main point of contact for Lena when she resonated with Spearhead. Lena was eager to connect with him and the rest of the squadron, though they did not share her sentiment. Lena would continue to talk nightly with Shin, thinking that he was not as bad as the gossip had made him out to be. She projected onto him the image of an ideal soldier.[20]

Following the death of Kaie, Lena began to confide in Shin, asking him for the names of the Processors after having been rebuked by Theo. The two learned more about each other through their conversations and their shared link to Shin's brother Shourei.[19] Shin would ask her to not forget him and the Spearhead Squadron during the Revolution Festival somewhat offhandedly, not knowing of the burden he had placed on Lena.[21]

Lena would dedicate everything in pursuit of the Spearhead Squadron once they left for the Special Reconnaissance Mission. During their reunion on the field of spider lilies, she was passionate in stating her reason for fighting to Shin once he told her to effectively give up, unaware that her reason was in front of her.[22] Their second reunion at the Juggernaut memorial would be less confrontational. They regarded each other with a salute before Shin revealed their identities. She held back her tears, but the emotions running through her was clear.[23]

Upon receiving Shin's confession of love to her, Lena kissed him in a moment of simultaneous passion and panic. As she had been flustered by the sequence of events not going the way she had envisioned, she runs away without giving him a verbal answer.[6][24] 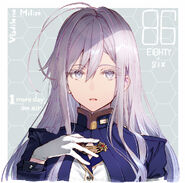 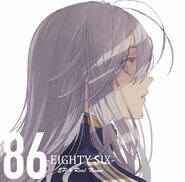 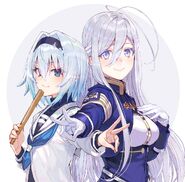