Teresa (テレザ,, Tereza?) is a minor character in 86 -Eighty Six- series. She is the maid employed by Ernst Zimmerman and the caretaker of Frederica Rosenfort. She later became the caretaker of the survivors of Spearhead Squadron.

Teresa has golden hair and blue eyes. She is said to have features of an ice queen, and is the splitting image of a woman Ernst once loved.[1]

While on duty, she wears a standard maid outfit consisting of an apron, a white cap and a pair of black shoes.

Teresa is shown to be a profesional in her job as well as being formal when she introduced herself to the survivors of Spearhead Squadron.[3]. She also stated that she gladly would preform her job.

She is also shown to be fond of children as she stated that she enjoys cooking for them because of their ''large appetite''. However she also has a motherly side as she comforted Frederica after she hugged her while crying after Shinei was teasing her. In which she also reminded her that it was her own fault.

Her past and upbringing are largely unknown, however at some point in time she was hired by Ernst Zimmerman to be employed as his personal maid, likely because she resembled Ernst's late wife.

She's first seen inside Ernst's home, introducing herself and stating that she would be taking care of the Spearhead Survivors.

While cleaning up the food, Ernst remarked that she made a lovely meal. In which Teresa stated that she loved to cook. Ernst also expressed his concern that it might be difficult for her to adjust to their new situation to which Teresa replied that there was no need and that she loves serving him and anyone else in the household.

When Ernst asked if taking the Spearhead survivors as replacements for the loved ones he lost was a stupid way to compensate for things, Teresa responded that he was being absurd and that they could never be replacements and that every being is unique in this world, that cannot be replaced.

In Episode 12, she is seen cleaning the house when Frederica asked her where Shin was while watching TV where a woman was pestering her man to get something for her. Teresa is later seen helping out with the groceries after she went shopping with Theo, Anju and Shin. Who were helping her after the car broke down.

After the Morpho Elimination, she was seen greeting the returning Nordlicht members with party poppers when they arrived at home, along with Ernst.[4]

As a maid, she is highly skilled in cooking and cleaning as well as preforming basic household tasks.

Ernst is her employer and she shares a formal relationship with him, however she also gives him advice once in a while when Ernst asked for it. She is shown to be loyal to him. 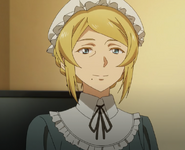