He was the elder brother of Shinei Nouzen, ten years his senior. Rei was a former Processor who fought on the Eastern Front before being assimilated into the Legion as a Shepherd.

Rei was a tall and bespectacled man with the long, bloodred hair of a Pyrope and the jet-black eyes of an Onyx, the inverse features of his brother—Shin.

Rei was a generally friendly and reliable older brother, but he is not without his faults.

Rei was the eldest son of Reisha and Yuuna Nouzen. He was sent to the Eighty-Sixth Sector along with his family soon after the war broke out. His father soon enlisted to fight for their rights, followed by his mother once Reisha died in combat. The absence of their parents left Rei and Shin in the care of a sympathetic Adularia priest. Later, he would also receive news of his mother's death. Due to the stress he accrued in the internment camps from his parent's deaths and imminent conscription, he snapped and irrationally took out his frustrations on Shin by strangling him. He was stopped by their caretaker, deeply regretting his actions. He left for the front lines before he could apologize to Shin.

One night when he was on patrol, he came across a young Vladilena Milizé, who was taken by her father to see the injustices brought upon the Eighty-Six. Their helicopter had been shot by a Stachelschwein and was forced to land, leaving them vulnerable to an attack from a nearby Ameise. He took the only survivor, Lena, to his base and sent her back to inside the Gran Mur.

Four years after his conscription, Rei was killed in action and assimilated as a Legion Shepherd.

Like Shin, Rei possesses the genetic ability of the Maika Clan. He is able to hear the unspoken words of his relatives. 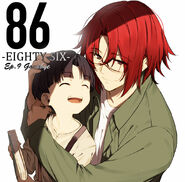 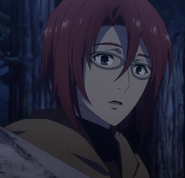