Shin had been on the battlefield for almost a year. His captain, Eijyu, suggested that he start considering his Personal Name and mark. Shin was dismissive of the idea, as he thought it was a pointless endeavor. The captain suggested the name Báleygr, due to his flame colored eyes, but Shin didn't think it fit him.

After a sortie in which the entire squad save for Shin had perished, he had come across a destroyed Juggernaut of an unknown squadron. The pilot had already decomposed within the cockpit. While his promise was to carry on the deaths of his squadmates, he felt that it was his duty to carry this stranger's mark as well. The Personal Mark painted on the unit, a headless skeleton wielding a longsword, resonated with him. After burying the bones and collecting the marks of his squadmates, he returned to the base. He requested the chief mechanic to paint the mark on his own Juggernaut, replacing the longsword with a shovel. Shin officially took up the Personal Name of Undertaker, the sole survivor that dug the graves of his comrades.

In his fifth year of deployment, April of RY 367, Shin and his squadron are combined with veteran remnants of other squadrons from the Eastern Front to form Spearhead Squadron, with Shin leading as captain. Characteristic of Shin's squadrons, Spearhead does not patrol the battlefront for the warning on Legion attacks, instead of relying on Shin's ability to detect the Legion. Despite the Processors' years of experience and the advanced awareness of the Legion, Spearhead soon takes losses. By the time Spearhead receives their new Handler, three Processors have fallen in action: Mashu, Mina, and Kujo.

Shin fought a battle in which his squadron was annihilated. His Handler at the time asked how many had survived, to which Shin ignored him and disconnected the Para-RAID.

On May 22nd RY 367, Shin and the Spearhead Squadron received the first Para-RAID synchronization from their new Handler, Vladilena Milizé. The Handler continued to check in on the squadron nightly, with Shin always the first to curtly greet her in a businesslike tone. The first half-month of Lena's presence as their Handler would pass by without any casualties in the squadron. Shin and the rest of his squadmates would entertain her for the time being, knowing that her time as the squadron's Handler would be short lived, just like the rest of them.

Relations between Lena and the squadron would sour after Kaie's death on June 15th. Lena herself would disconnect abruptly from their resonance after Theo's tirade. She would eventually nervously reconnect with Shin later that night. As always, Shin greeted her in a businesslike fashion, without a sense of disdain the rest of his comrades had shown earlier. Sensing that Lena was eager to prove herself once more to the squadron, Shin gave her a chance and introduced his comrades' names to Lena one by one, also telling her about his promise to carry the tags of his fallen comrades. He would eventually introduce himself as Shinei Nouzen, to which Lena would ask if he was related to a Processor by the Personal Name of Dullahan—Shourei Nouzen. He confirmed that Shourei was his brother and told her of his death five years ago. He admits to Lena that he does not have any plans once he was discharged, only that his current goal was to search for his brother.

Shin—who had always been observant of his squadmates despite never seemingly looking at them—noticed that Theo had felt bad about his outburst towards Lena. The next day, Shin would set up Lena and the squadron to make amends, all the while he mostly kept silent. The squadron was able to set their boundaries for Lena, and in turn they would tolerate Lena as their Handler.

One day, when Shin and Lena were making idle chatter regarding Lena's duties and Shin's brother, Shin suddenly urged everyone to prepare for battle. Once ready, Shin made a request to Lena to turn off her Para-RAID for the mission, as the incoming Legion assault was comprised of many Black Sheep. As she did not understand Shin's intentions, Lena did not cut off her Para-RAID. Shin was content with only warning her and proceeded with the battle. As soon as Lena began to panic due to the voices, Shin forcefully cut the link. Shin would explain his ability and background to Lena later that night, as well as his theories on how the Legion operated. 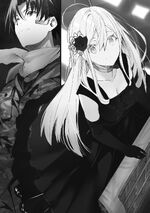 As Shin was inspecting the supplies sent by Lena, he was rudely informed of a "special warhead" she had sent by one of the resupply officers. He soon contacted her via Para-RAID to thank her for the explosives she had sent—i.e., fireworks. He increased his synchronization level to where the cheers of his squadmates could be heard by Lena. Shin continued to talk to her. He thanked her for letting his fallen comrades be honored by an artillery salute, reminisced with her about his brother, and asked her to not forget the Spearhead Squadron once they perished.

Shin and the remainder of the squadron finally informed Lena of the execution ground that was the First Ward after four of their members died during a sortie. They laid out all of the lies the Republic has spouted to them over the years as evidence of their certain demise within the next month. Shin and Raiden looked back on that day's battlefield, regretting that they couldn't find pieces to etch the names of their fallen. Shin listened intently towards the sounds of the Legion and confirmed that his brother had finally found him. Shin expressed his joy at the situation, which left Raiden stunned. Shin asked what Raiden would do, to which he replied that he would stick with their Reaper to the very end.

The Spearhead Squadron was ordered to deploy on their Special Reconnaissance Mission. Lena apologized that she could not rescind the order, to which Shin assured her that this was their destiny from the beginning. The Spearhead Squadron would soon deploy on their mission with five members remaining, all had accepted their fate. Shin especially had looked forward to putting his brother to rest.

Shin and the Spearhead Squadron engaged against the Dinosauria manned by the vestiges of Rei. At first, Shin gave the order for everyone to advance ahead of him as he took on his brother alone. Raiden and the rest objected to their leader's order, instead choosing to support him by eliminating the other Legion surrounding Rei. Another form of support would arrive in the form of Lena's artillery. Shin left his squadron to their own devices as he fought his brother mano-a-mano, blocking out all other distractions. Through their dance of death, the two brothers would have their final conversation. Shin would eventually make a mistake and lose consciousness.

Rei approached Undertaker, intending to assimilate his brother into the Legion. His squadmates would attempt to bind the Dinosauria with their anchor wires, but the Juggernauts were simply too light, unable to stop the unit completely. The efforts of the squadron would not be in vain, however. Just as Rei's micromachine hands prepared to tear off Undertaker's canopy, Lena would fire her artillery in his direction. As Rei did not intend to have Shin simply die, he used his micromachine arms in order to protect him, not knowing that the shell was a dud.

Shin awoke after Lena fired the dud and resumed combat. He fired one final high-explosive anti-tank warhead from his cannon at point-blank range. Before Rei was destroyed, his micromachine arms slipped into Undertaker's cockpit and gave Shin a final goodbye. Shin finally let out the emotions he was unable to express since his near death. After composing himself, Shin and his squadmates would bid Lena a brief, nonchalant, and carefree farewell.

Volume 2: Run Through the Battlefront (Start)[]

This article is a stub. You can help 86 - Eighty Six - Wiki by expanding it.
Community content is available under CC-BY-SA unless otherwise noted.
Advertisement