This article is a stub. You can help 86 - Eighty Six - Wiki by expanding it.

Shinei Nouzen (シンエイ・ノウゼン,, Shinei Nouzen?) is the field commander of Spearhead Squadron with the personal name Undertaker. Having survived 5 years on the front lines, he is considered an elite Processor. Among the Eighty-Sixers, he is known as the Reaper or Death God. He is 16 years old at the beginning of Volume 1. His ability to hear the voices of the Legion allows him to locate the Legion without the use of detection systems like radar. The ability developed from a genetic extrasensory ability of the Pyropes that allowed certain people to sense others' thoughts by use of a vestigial region of the human brain.

As a mixed Pyrope and Onyx, Shin has blood-red eyes and jet black hair. His pale features and slender physique are characteristic of the Giadian Empire's nobles. He almost always wears a sky-blue scarf around his neck to conceal the jagged scar on his neck. As the Spearhead Squadron's leader, he wears a desert camouflage uniform scavenged from an abandoned Republic military depot. By Volume 2, he has switched to the Federacy's steel-colored Panzer jacket uniform but retains his blue scarf, removing it only for official meetings. He is described to be rather handsome, attracting the attention of a few of his female comrades.

He feels a great sense of responsibility to accomplish his own goals and to protect his companions. This is demonstrated in Volume 1, where he chooses to face the Shepherd alone to put his brother to rest, and in Volume 2, where he takes control of the squadron's last Juggernaut and attempts to hold off the Legion so that the rest of his squadron can escape to Federation territory.

In contrast, he has a distinct lack of care for himself. He compares himself to the Legion, calling himself a ghost, aimless and wandering like the Legion that had lost their country. Consequently, he often throws himself into dangerous situations without regard for his own safety, somehow surviving through luck and combat skill. This tendency grows worse in Volumes 2 and 3.

Shin's ability to hear the voices of the Legion places enormous mental strain on him even when he has become accustomed to listening to the constant wails of the dead. His responsibility to carry the names and memories of his fallen comrades also burdens his conscience. The weight of his responsibilities and the effects of his ability have contributed to his stoic nature and lack of mirth.

Shin is known to be an avid reader, reading various types of books to take his mind off of the voices of the Legion. He has a dismissive attitude towards maintaining the condition of his Juggernaut, an aspect of his that leads to many arguments with Chief Mechanic Lev Aldrecht.

Born on May 19th in Republic Year 351, Shin lived with his family in the first District of the Republic before the war with the Giadian Empire began. It is implied he lived a sheltered life, surrounded by "only kindness and affection." He also appeared to have developed his extrasensory ability early on, hearing "voices that spoke without words" from his family and others. He would often play with the daughter of his father's colleague, Henrietta von Penrose, whom Shin called Rita.

Being a mixed Pyrope and Onyx family, Shin and his family were forced to relocate to an internment camp when the war began due to the Republic's discriminatory policies. Shin's father was first to enlist in the Republic military, accepting the Republic's promise that Shin and the rest of his family would have their rights restored in exchange for military service. Despite this, the Republic does not uphold its promise. Upon delivering the news of Shin's father's death, it informs Shin's mother that the military service was in exchange for only one person's citizenship. Continuing to trust the Republic, Shin's mother also enlists to protect her sons, leaving eight-year-old Shin and his eighteen-year-old brother Shourei in the care of an Alba priest, a friend of the Nouzens who had resisted the Republic's policies and remained in the village-turned-internment-camp's church.

Shortly afterward, Rei receives notice of his mother's death on the battlefield and an enlistment form for him, proving the Republic's promise to be a lie. Shin, to whom the concept of death was not yet comprehensible, implores Rei to explain why their mother would not be returning. Shin's pleas caused the grieving and frustrated Rei to snap and choke Shin in a fit of violent rage. Rei brings Shin to the brink of death before the priest intervenes and resuscitates Shin; however, Shin is left with a jagged scar around his neck as a reminder of his brother's hatred. The near-death experience also opens Shin's telepathic ability to a broader range of human consciousnesses, including those of the Legion, by temporarily experiencing the post-mortem collective consciousness of humanity. Rei avoids Shin after the incident and refuses to say farewell or even glance at Shin when he enlists and leaves Shin behind with the priest.

Four years after Rei's enlistment, Shin hears his brother's voice among the laments of the Legion and realizes that Rei is dead. On that day, Shin enlists with the military and becomes a Processor.

Shin had been on the battlefield for almost a year. His captain, Eiju?, suggested that he start considering his personal name and mark. Shin was dismissive of the idea, as he thought it was a pointless endeavor. The captain suggested the name Báleygr, due to his flame colored eyes, but Shin didn't think it fit him.

After a sortie in which the entire squad save for Shin had perished, he had come across a destroyed Juggernaut of an unknown squadron. The pilot had already decomposed within the cockpit. While his promise was to carry on the deaths of his squadmates, he felt that it was his duty to carry this stranger's mark as well. The personal mark painted on the unit, a headless skeleton wielding a longsword, resonated with him. After burying the bones and collecting the marks of his squadmates, he returned to the base. He requested the chief mechanic to paint the mark on his own Juggernaut, replacing the longsword with a shovel. Shin officially took up the personal name of Undertaker, the sole survivor that dug the graves of his comrades.

In his fifth year of deployment, Shin and his squadron are combined with veteran remnants of other squadrons from the Eastern Battlefront to form Spearhead Squadron, with Shin leading as captain. Characteristic of Shin's squadrons, Spearhead does not patrol the battlefront for the warning on Legion attacks, instead of relying on Shin's ability to detect the Legion. Despite the Processors' years of experience and the advanced awareness of the Legion, Spearhead soon takes losses. By the time Spearhead receives their new Handler, three Processors have fallen in action; Matthew, Mina, and Kujo.

A genetic feature that is seen in people of Pyrope heritage. Those with extrasensory ability can communicate with family members by hearing their thoughts. This ability makes use of the part of the brain known as the Night Head and is the basis for the Para-RAID's communication abilities. The range and limitations of the ability are unspecified in people other than Shin.

In Shin's case, his ability was originally restricted to only his family, the same as others with the ability. However, during his near-death experience after being attacked by his brother, Shin's consciousness temporarily entered the abyss of death, and he was able to hear the voices of those who had died. Upon being resuscitated, Shin retained the power to hear the voices of the dead that were still among the world of the living. The ability allows him to detect the Legion because the Legion was designed with the human neural system as a basis for their central processing system. While the Legion's original replica processors are not as easily detected by Shin, being more of an electric haze to his ears, the Legion's processors have derived from the neural systems of dying Eighty-Six create easily distinguishable, and haunting, voices that Shin can hear.

The voices Shin hears can be transmitted through the Para-RAID. By turning the synchronization rate of his Para-RAID to the maximum, Shin has traumatized many incompetent and abusive Handlers with the haunting voices to the point that one Handler commits suicide. When linking with other Processors, Shin turns the synchronization rate lower. The transmission of voices also allows linked Processors to determine the positions of nearby Legion using the voices' distance and direction.

Shin's combat skills are unmatched by other Processors. Over the five years of combat as a Processor, Shin has honed his skills to levels far above the other veterans. Combining his reflexes and telepathic ability, he can perform attacks that no other Processor can do, such as charging three Löwe at once in a frontal attack. His Juggernaut is specialized for his combat style, with all of its limiters being broken to maximize mobility.

He is also proficient in hand-to-hand combat, taking down the much larger Raiden in a fistfight and stating that he could disarm and kill three Republic soldiers before they can even remove their safeties. His proficiency in various forms of combat ties back to his heritage as a Nouzen, an Onyx clan that served as the imperial guard. 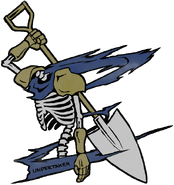 Retrieved from "https://86-eighty-six.fandom.com/wiki/Shinei_Nouzen?oldid=2583"
Community content is available under CC-BY-SA unless otherwise noted.