Shana Aya (シャナ・アヤ,, Shana Aya?) is a secondary supporting character in the 86 -Eighty Six- series introduced in Under Pressure.

She was the deputy of the Brísingamen Squadron, which was the group that led the defense of the Republic during the large-scale offensive.

Volume 8: Gun Smoke on the Water[]

During the Mirage Spire Operation, the Strike Package engaged the Noctiluca after having dealt with the spire's Morpho. Shana took it upon herself to act as the sharpshooter atop the Mirage Spire as Kurena, who was supposed to fill the position, became too shocked to fight after witnessing the Undertaker fall into the sea. As the battle came to a close, the damaged Noctiluca temporarily fixed its railgun and aimed to destroy the spire.[2] Shana was unfortunately unable to withdraw to the lower levels, eventually falling to the sea along with the spire's upper levels.​

Shiden was able to overhear Shana's last words from her Para-RAID, a simple "So cold". Shana had probably bled out. Kurena believed that she was to blame for forcing Shana to become the sniper, which sealed her fate atop the toppling tower. It was later revealed that the Legion had recovered her corpse, assimilating her as a Shepherd into the Halcyon.[3] 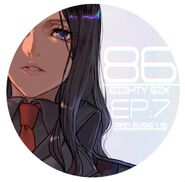