"What kind of dumb ass hangs himself just because he knows he's going to die tomorrow? Even if you have no choice but to walk the gallows, you can still choose how you're gonna climb the steps. We've made our choice. All that's left is to live by that." ― Raiden to Lena, regarding the Special Reconnaissance Mission.[1]

Raiden Shuga (ライデン・シュガ,, Raiden Shuga?) is the vice captain of Spearhead Squadron. As a First Lieutenant, he holds the position of operations commander of the Eighty-Sixth Strike Package and its 1st Armored Division should Shin be deemed unfit to command.

Having survived four years on the Eastern Front and the Special Reconnaissance Mission, he is considered one of the most elite Processors alive. As he spent three years with Shin prior to joining Spearhead Squadron, Raiden is the closest person to him in the squadron.

Raiden sports the greenish steel-colored hair and eyes of an Eisen. He towers over others with his height of 185 cm and his muscular physique. His facial features are described as sharply defined, exemplified by his scars: one above the right eyebrow and another on his left cheek. Like the other members of the Spearhead Squadron, he wore a desert camouflage combat uniform, although he seemed to like forgoing the jacket and simply wore the gray top. He later switched to the Federacy's steel-colored panzer jacket uniform.

Raiden is the Spearhead Squadron's big brother; he is the emotional leader that Shin could never be. He is also called the squadron's mom, because of his skills in traditionally feminine areas such as cooking and sewing, coupled with his insistence to make sure everybody was alright.

Raiden is not afraid to be confrontational and upfront. Whenever he has had a problem with anyone, he would tell it to their face without fear. This includes his captain, Shin, as they have had numerous fights over their time together. When he had first met Shin, Raiden was quick to snap and assault anyone who ticked him off, earning him the somewhat insulting Personal Name of Werhwolf.[10] While he has mostly subsided in his hot temperament as he has matured, he still retains his foul mouth.

As a byproduct of being Shin's right hand man, he was considered the only person that was able to survive alongside the Reaper of the Eastern Front long term. Prior to Raiden, none of Shin's squadmates had ever survived fighting alongside him.

He is well known for his foul mouth.

Raiden was born on August 25th Republic Year 351; he was originally from somewhere in the Republic's Twenty-Third Sector. He is the only Spearhead Squadron member able to remember their birthday, as he was spared from being exiled to the Eighty-Sixth Sector at the outbreak of war. An elderly Alba woman hid him and several other Colorata children in an abandoned boarding school in the Twenty-Third Sector. For five years, Raiden and the others managed to avoid being sent to the concentration camps. However, they were eventually discovered when someone exposed them to the Republic. Despite the pleas and protests of their Alba caretaker, the Colorata children were taken away to the Eighty-Sixth Sector. After being conscripted as a Processor, Raiden was placed in a squadron with the other children who had been sheltered. After a series of battles, Raiden was the sole survivor of the group who had been hidden in the Eighty-Five Sectors. His squadron was disbanded and reassigned, leading Raiden to be assigned to the the squadron Shin commanded at the time.[11]

While Raiden initially was at odds with the seemingly aloof Shin, the two gradually became close friends. Raiden eventually won the role of vice-commander and served as Shin's right-hand man.[11] The two served together from then on, joined the next year by Kurena and Theo. Three years after meeting Shin, they would be sent to the First Ward and form the Spearhead Squadron.[7]

Raiden's Wehrwolf Reginleif has heavy machine guns mounted on its grappling arms; its main armament switched for an autocannon. Suppressive fire—using barrages to halt the enemy's advance and support his allies advance—is his specialty. Raiden inadvertently found himself in this role after fighting alongside Shin for years, who excels at close-quarters combat. Despite being a Name Bearer himself, he felt that he could never keep up with the stunts pulled by the vanguard, especially Shin and Theo's high-mobility combat styles. The supporting role is one that comes to him naturally as a kind busybody who looks after his comrades' well-being, though he does not like to admit that. 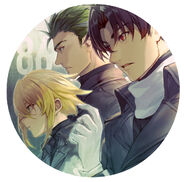 Shin, Raiden, and Theo by Shirabii 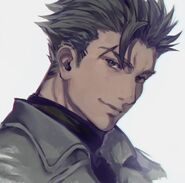 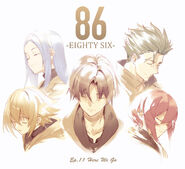