She was Vladilena Milizé's mother and the wife of Vaclav Milizé.

Margareta has silver eyes and hair of an Celena. She is dressed in an purple antiquated gown and wearing two pieces of earrings One of her more distinguishing features is her double ahoge that Lena has inherited.

Unlike her husband, she strongly upheld the theory of the superiority of the Alba race and was discriminatory towards Eighty-Six.[1]

Her upbringing is largely unknown, however it is implied that she came from a noble family and at some point in time she married Vaclav Milizé and gave birth to their daughter Vladilena Milizé.

On May 13th RY 367, she ate breakfast with her daughter.[1][2] She had the same conversation with her daughter about pedigree, status, standing, lineage and superior bloodline. Margareta asked Lena to consider quitting the army and getting married. She considered the war to be practically over, to which Lena refuted that protecting the motherland is a Republic citizen’s duty and pride.[1]

On August 25th RY 368, the Legion breached the Republic in the Fall of the Gran Mur.[3] Margareta tried to stop Lena from going to the battlefield, stating that the fighting was already futile and that Lena will end up as her father. Lena rejected her mothers pleads as she will not run away from battle. Margareta was later killed by the Legion during the large-scale offensive as she protected a child from being trampled by a Löwe. Only for her to be trampled instead. Lena was informed about her mothers demise by their personal maid, the only survivor[4][5]

During hailing from the nobility it is implied that she knows a certain degree of etiquette.

She wanted Lena to resign from the military and get married to a husband from a good family.[1][2]

It is later revealed that Margareta did care about her daughter to a certain degree as she was worried about Lena's well being and tried to stop her for going into battle. As she wanted nothing but for Lena to be happy. [6]

While sharing different views in regards of the Eighty-Six. It has been shown that she still loved him when he died. 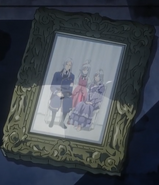 Margereta with her husband and daughter