Lecca was a Processor belonging to the Sixth Platoon of the Spearhead Squadron led by Kurena Kukumila.

On April 1st RY 367, she was assigned to the Spearhead Squadron in the First Ward barracks. The Spearhead Squadron had their photos taken to update the Processors’ personnel files, holding a board with their internment numbers as if it were a mugshot. Shin requested the personnel officer for a group photo, and she stood together with Myna and Mikuri.[2]

On April 5th, she and the Spearhead Squadron held a cherry blossom party to celebrate their formation squad. They watched the shooting stars together.[3]

On April 22nd, she watched Shin helped Kurena from falling.[2]

On May 1st, she, Kaie, Haruto quizzed Fido about edible food.[2]

On May 12th 2148, she asked Theo to help her out. She and the Spearhead Squadron ate at the canteen.[4] She, Anju, Kaie and Kurena cheered the boys playing soccer, and they watched Kujo kicked the ball at Lev.[2]

On May 22nd, she participated in the battle against the Legion where they lost Kujo. She later played darts with Myna, and missed the target board.[4]

On May 29th, Shin assembled the Spearhead Squadron to intercept the Legion at point 208.[5][6] She smirked when Handler-One was genuinely impressed with their anticipation.[5]

The Spearhead Squadron finished tidying up after dinner. She was unamused with Handler-One calling them. She laughed when Shin responded to Handler-One when he claims he is an illiterate. She was gloomy when Handler-One asked Shin about his goals in the future after serving his five year services.[5]

The female squadron did their laundry on the banks of a river, she played in the river with the other girls. The girls teased Kurena when she became increasingly flustered.[7][6] The girls punished Daiya, Haruto and Theo for peeking on them on June 13th.[2]

She sat next to Anju while she was knitting in Shin's room at the dormitory. She laughed when Kaie calls Handler-One a virgin.[7][8]

On June 15th, she participated in the battle against the Legion where they lost Kaie.[7]

On June 16th, she, Kurena and Anju cheered the boys playing basketball. The trio noticed Theo's dejection, and they tackled him to interrogate him. She commented that she noticed Theo tends to button only one button.[9]

The next day. The rest of the squadron heard the gist of their conversation from Shin.[8] She was present when Handler-One Resonated with them and revealed her true name.[9][8]

On June 24th, the Spearhead Squadron intercepted the Legion herded by the black sheep. She gasp in horror when she heard Kaie's voice among the Legion. She was visibly distraught when she hears Kaie repeated her last words.[10][11] Later that night, she is seen hanging out with Kurena, before returning to their rooms.[10]

On July 27th, the Spearhead Squadron were sent on a mission and they passed the spot where they had the cherry blossom party, they reminisce the party. While targeting a Löwe, her Juggernaut was strike by a Skorpion artillery fire, resulting her Juggernaut immobilized with it's leg blown off. She tries to fend off an Ameise with her pistol but she committed suicide before she was killed so as to not be assimilated into the Legion. She was the seventh casualty of the Spearhead Squadron.[3]

She was puzzled with Fido able to identify the awful tasting synthetic food.[2]

She teased Kurena's one-sided infatuation with Shin, and calls her cute when she's flustered about him.[7]

She shares the same room as Kurena.[3]

She is often seen hanging out with Myna.

She is often seen hanging out with Mikuri.

The Spearhead Squadron unanimously agreed Raiden would be the vice captain of the Squadron.[12]

The Spearhead Squadron unanimously agreed Shin would be the captain of the Squadron.[12] Prior from meeting him, she had heard rumours of the headless reaper, and she misinterpreted his emblem with his neck scars. She looks forward working with him.[3] She seems to agree with Kujo's comment about rather than dying, it is better for Shin to guide them to death.[4] Her last words was entrusting the rest to Shin.[3]

She founds him expressionless and unlike Kurena; he is unadorable for his lack of reaction.[7]

When she heard a rich girl working as a Handler, she assumes her to be a fragile being who couldn't the outdoors.[3] 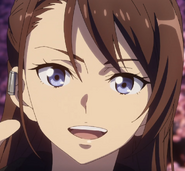