Kujo has the dark complexion, black hair, and black eyes of a Meridiana. He possessed the largest build in the Spearhead Squadron.[6]

Kujo was an upbeat optimistic individual. He believed life should be enjoyed to the fullest and if you can't laugh, you lose.[7]

Shin remembers that contrary to his rough exterior, Kujo was an expert in astrology.[8] Kujo had once taught Kaie about meteor showers.[9] Fido's memory bank has stored Kujo teaching Fido about nature in life.[2] The surviving Spearhead Squadron remembers Kujo kept talking about watching the moon.[10]

Before the war, Kujo lived with his father, mother, and other siblings. He had only attended school for a few years.[5]

On April 1st RY 367, he was assigned to the Spearhead Squadron in the First Ward. The Spearhead Squadron had their photos taken to update the Processors’ personnel files, holding a board with their internment numbers as if it were a mugshot. He was amazed that Shin had lodged a nut and bolt at the graffiti image of Saint Magnolia, while indirectly intimidating the Republic officer.[2]

Kujo started a countdown to the end of his service on the next day, much to Lev's disapproval.[2] Kujo would continue to update the countdown on the hangar's black board until his death. The message stopped at the countdown of 128 days.[4]

On April 5th, he and the Spearhead Squadron held a cherry blossom party to celebrate their formation squad. They watched the shooting stars together.[7]

On May 12th, Kujo was seen changing the countdown message. He and the Spearhead Squadron ate at the canteen.[3] He played soccer with his Squadron, and he kicked the ball at Lev's head.[2]

On May 18th, he was stargazing and night sky watching with Fido.[2]

His last mission was on May 22nd RY 367.[2] He was mortally wounded by a Self-Propelled Mine.[4][11] One had latched onto Kujo, who’d mistaken it for an injured soldier. It had been a night-time battle; a mission to rescue another unit.[4]

He assumes Fido hadn't understood the countdown's meaning. He smiled fondly while teaching astrology to Fido.[2]

He once fought for dominance in the squadron against Kaie, and he was easily defeated by her.[6]

He taught her about meteor showers.[9]

He and the others unanimously agreed Raiden would be the vice captain of the Spearhead Squadron.[6]

Kujo and Daiya called Raiden as the squad’s mom.[12]

He and the others unanimously agreed Shin would be the captain of the Spearhead Squadron.[6] He was glad to be part of his unit.[7] He believed that rather than dying, it was better for Shin to guide them to death.[3]

Daiya and Kujo had once belly danced in front of him.[9]

Before dying, he was agonizing in pain until he saw Shin and was comforted by the sight of him. He reminded Shin of his promise to never forget him.[3]

He fed the cat before it ominously jumped at him.[3]

He heard rumors of a rich girl working as a Handler. He laughed at Theo's caricature of her. He wished to meet her if she was a kind princess or goddess to save the Eighty-Six.[7] 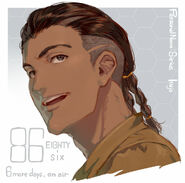