She was the leader of the Spearhead Squadron's Fourth Platoon.

Kaie was a short, slender Orienta girl with black hair and eyes. She kept her hair in a long ponytail. Commonly found in the Spearhead squadron uniform alongside others.

As the oldest in the Spearhead Squadron, Kaie was the most mature in her worldview. She understood not to generalize the Alba and the Eighty-Six as monolithic groups from her experience in the internment camps, as well as from hearing the recounts of her squadmates' experiences such as Theo's former captain and Anju's discrimination.

She was the type of person to quip and tease the other members of Spearhead. She called Shin out on his lie when he said he was illiterate, and was very aggressive in teasing Kurena regarding her crush on Shin.

She was one of the more vocal communicators with Lena, being honest with the handler, if sometimes blunt.

Kaie was born in the Republic of San Magnolia on April 7th RY 349 / SY 2130. Like the other Colorata, she was sent to the internment camps of the Eighty-Sixth Sector when she was young. As an Orienta—a rarer race in the sector—she was heavily discriminated against by her fellow Eighty-Six. She was in her fourth year as a Processor when she was transferred into the Spearhead Squadron with Haruto in RY 367.

During a sortie, she was killed by a Löwe when her Juggernaut became trapped in soft terrain. Kaie was the fourth casualty of the Spearhead Squadron and was assimilated into the Legion as a Black Sheep. 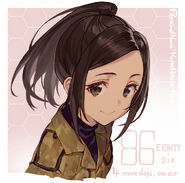 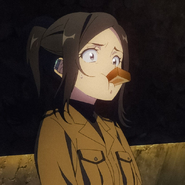