She is a member of the Republic Armed Forces and later the Eighty-Sixth Strike Package. She serves in the Research Division and specializes on working on the Para-RAID system her father developed.

Annette has the silver hair and eyes of a Celena. Her outfit on duty consists of the female Republic uniform paired with a lab coat.

Annette is a workaholic and as a result she will often wake up late into the day.

Rita was a childhood friend of Shin before the war began, often playing with each other as their parents were friends. During the first year of the oppression against Eighty-Six by the government of the Republic, Rita's family provided shelter for Shin's family to hide from the officials. That was until Rita was bullied for being friends with a Colorata boy. She asked her father to kick Shin's family out of their home; as a result, Shin's family was sent to the Eighty-Sixth Sector.

Annette was a friend of Lena's since secondary school. She skipped a grade along with Lena, and thus she is Lena's only friend who is the same age.

After her father was killed during the testing of the Para-RAID device, she took on her father's role as a developer. Although it was stated to be an accident, her father took his own life. He was unable to bear the guilt of betraying the Nouzens and engaging in human experimentation. Annette also bears regrets of betraying her childhood friend. She understood the true situation of the Republic, but did not have the will to change it due to feeling powerless. 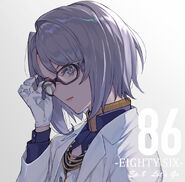