He was a Processor belonging to the First Platoon of the Spearhead Squadron led by Shinei Nouzen.

Haruto had the brown hair and red eyes of a Rubis. He was noticeably shorter than the other boys.

Haruto was the mood maker of the Spearhead Squadron, cheery and slightly perverted. He seemed to have enjoyed the company of the other members and very much looked forward to going on the Special Reconnaissance Mission with the other five.

Haruto was the final casualty of the Spearhead Squadron, dying only two days before the Special Reconnaissance Mission. 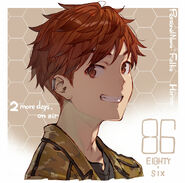