With pride in themselves and a vow to their fallen comrades, they will not stop until the end. Even if they run out of weapons and ammunition, even if Fido—who has been with them for so long—is wrecked and lost. And so, they reach their final resting place. Meanwhile, Lena, who was left behind in the Republic, finally landed on their land. At the Spearhead Squadron's base, not over the Para-RAID, she felt the faint presence of the remaining members...[1]

After a skirmish with the Legion, all but one of Spearhead's Juggernauts are disabled and Fido too crippled to move, forcing Spearhead to leave him behind along with the box of dog tags. In addition, most of their supplies were destroyed, leaving them with limited prospects of traveling any further. With no choice, Spearhead continue on to another abandoned Imperial town, where they spend the night in a school and briefly roleplay being students again. The next day, Shin takes the last remaining Juggernaut to intercept the Legion, intending to use himself as a decoy for the rest of Spearhead to escape. However, Shin's friends follow him into battle, and all of them are rendered unconscious while Shin hears the vengeful voice of Kiriya. Meanwhile, Lena arrives at Spearhead's base as the replacement Spearhead is transferred in. She explores the base and finds a note left behind by Spearhead expressing their final farewells to her, as well as a request to adopt the kitten they had been keeping as a pet. Inspired by Spearhead's words, Lena resolves to keep fighting and moving forward. Elsewhere, Shin dreams of being taken away by his big brother, Rei.[2] 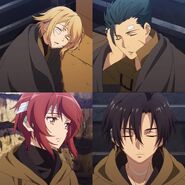 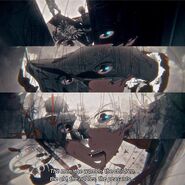 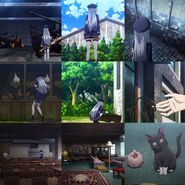