He was the leader of the Spearhead Squadron's Fifth Platoon.

Daiya has the blond hair and blue eyes of a Sapphira. He is described as a tall and lanky boy. As with the other members of Spearhead, he is dressed in scavenged desert camouflage fatigues.

He is described as someone prone to awkward or uncomfortable situations. He barged in on the girls bathing in a creek and is promptly attacked by a barrage of thrown objects.

Daiya also has a tactful and compassionate side. He comforts Kurena when she becomes frustrated by the unwanted interference of Lena in the squadron's downtime. Anju also recalls his complimenting her hair while they were in their first squadron, even though he knew she was only growing it out to hide her scars.

Daiya was born in the Republic Year 350. This made him a year older than most of the other characters, though he was a year younger than Kaie and Kujo. Anju and Daiya were both assigned to the same squadron after conscription. They became close friends and continued to serve in the same squadrons for the next four years. During those years, Daiya would earn the personal name Black Dog. The pair were assigned to the Spearhead Squadron in RY 367 along with their Claymore Squadron comrades..

Daiya was euthanized by Shin after being mortally wounded by a Self-Propelled Mine. He was the eighth casualty of the Spearhead Squadron.[4]

Anju and Daiya were assigned to the same squadron on their first deployment and remained together all the way to their assignment to Spearhead Squadron. When they first met, he knew she was growing her hair out to hide something but still complimented her and told her to keep letting it grow out. The two became close friends over their years of fighting together. It is confirmed that Anju had a crush on Daiya, and heavily implied that he reciprocated those feelings as well. 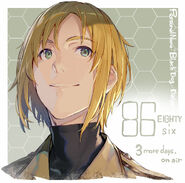