86 -Eighty Six- (86ーエイティシックスー, Eiti Shikkusu?), stylized as 86--EIGHTY-SIX or 86: EIGHTY-SIX and synonymously known as simply 86, is an anime adaptation of Asato Asato's sci-fi light novel series published by ASCII Media Works. The series, produced by Aniplex and production led by A-1 Pictures, premiered on April 10, 2021 (effectively April 11, 2021). The second-half of the season premiered on October 2, 2021.

The Republic of San Magnolia has been at war with the Giadian Empire for nine years. Though it initially suffered devastating losses to the Empire's autonomous mechanized Legions, The Republic has since developed its own autonomous units—Juggernauts—which are directed remotely by a Handler. While on the surface the public believes the war is being fought between machines, in reality, the Juggernauts are being piloted by humans and all of them are the Eighty-Six, the designation given to the sub-humans of the Eighty-Sixth Sector who are persecuted and stripped of their rights by the racist-led Alba government.

Major Vladilena "Lena" Milizé is an Alba noble and military officer in the Republic's Military who is assigned as a Handler of the Spearhead Squadron of the Eastern Front, an elite unit composed entirely of Eighty-Sixer veterans who have earned names led by their squad leader, Shinei "Undertaker" Nouzen. As Lena gets to know Shinei and the rest of the Spearhead Squadron, she becomes sympathetic to his people's plight and tries to help them. At same time, Lena and Shinei learn a dark secret: the Republic and the war with the Empire is not what it seems.

The TV-anime adaptation was announced on March 22, 2020 during a live-stream event commemorating the first year anniversary of Kadokawa's light novel recommendation website Kimirano. The official anime website domain and an official Twitter account was set up to coincide with the the video trailer and reveal of a poster. The information disclosed in the reveal included the production studio, series director, series composition, and character designer on the staff side, and the character voice actors for Shinei Nouzen and Vladilena Milizé on the cast side.[9]

On December 22, 2020, a livestream event of the anime adaptation on Aniplex's YouTube channel and NicoNico revealed the first promotional video along with the first key visual.[10][11] Information was also lifted regarding the CG production team and music composition along with the disclosure of the release date slated for April, 2021.[12][13]

On March 5, 2021, during the Kadokawa Light Novel Expo 2020 the 86 stage event unveiled the anime will premiere on April 10, 2021, at 24:00 JST and the Japanese stations on which it will air weekly. A second promotional video featuring a short length of the ending theme song "Avid" by SawanoHiroyuki[nZk]:mizuki, along with the second and final key visual before its broadcast was lifted.[14][15] On the staff side, information regarding art director, background art, color designer, CG director, director of photography, editor, and sound editor was disclosed, while on the cast side - the character voice actors for the Spearhead Squadron and other supporting characters. The opening and ending theme song titles and performers were also revealed.[16][17][18]

On March 26, 2021, during the AnimeJapan 2021 event the 86 stage released the third and final promotional video the before official premiere which featured a short length of the opening theme song "3 minutes 29 seconds" by hitorie. It was also revealed that the anime would be divided into two cours.[19]

On March 31, 2021, Muse Communication licensed the anime for simulcast in Southeast Asia where it will stream on the services iQIYI and Bilibili.[20] And on April 6, 2021, Crunchyroll announced 86 as part of their Spring 2021 simulcast lineup where it will be available for streaming in North America, Central America, South America, Europe, Africa, Oceania, the Middle East, and CIS.[21]

On April 14, 2021, Crunchyroll announced the anime will have English, Portuguese, Spanish, French, and German dub options in their respective regions.[22] 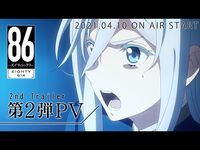 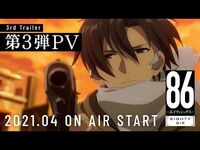 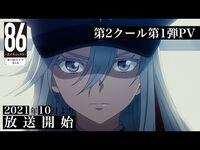 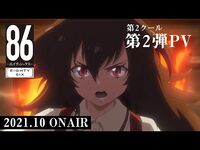 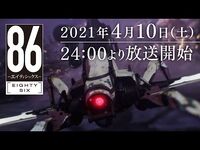 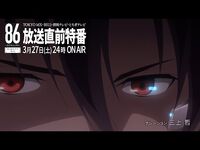 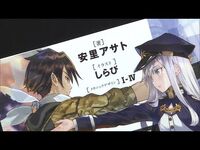 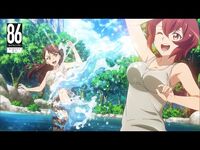 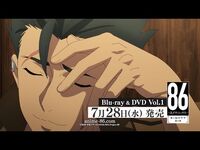 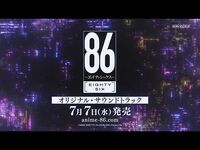