Alice Araich? (アリス・アライシュ,, Arisu Araishu?) was a minor character in the main 86 -Eighty Six- series and the deuteragonist of the Fragmental Neoteny: Pledge prequel story.

She was the captain of the Halberd Squadron, the first squadron that Shin was part of. Alice was the person who gave him his blue scarf, as well as the origin of his promise to carry the fragments of his fallen comrade's Juggernauts. She would have been five years his senior.

Alice had the the ink-black hair and eyes of a Jet. She wore a forest-camouflage uniform and the blue scarf that she eventually gave to Shin. 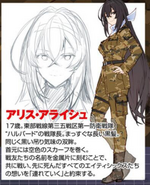