86 -Eighty Six- (86ーエイティシックスー, Eiti Shikkusu?), stylized as 86--EIGHTY-SIX or 86: EIGHTY-SIX and synonymously known as simply 86, is a Japanese science-fiction light novel series written by Asato Asato and illustrated by Shirabii. It has been serialized in ASCII Media Work's Dengeki Bunko imprint since February 10, 2017. Yen Press licensed the light novels in English and published the first volume on March 26 2019. An anime adaptation produced by Aniplex and production led by A-1 Pictures, premiered on April 10, 2021 (effectively April 11, 2021).

A War Without Casualties

The Republic of San Magnolia has long been under attack from the neighboring Giadian Empire's army of unmanned drones known as the Legion. After years of painstaking research, the Republic finally developed autonomous drones of their own, turning the one-sided struggle into a war without casualties-or at least, that's what the government claims.

In truth, there is no such thing as a bloodless war. Beyond the fortified walls protecting the eighty-five Republic territories lies the "nonexistent" Eighty-Sixth Sector. The young men and women of this forsaken land are branded the Eighty-Six and, stripped of their humanity, pilot the "unmanned" weapons into battle... 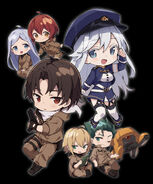 Ever since its release, the series has achieved wide critical acclaim. It also won the 23rd Dengeki Novel Grand Prize. The novel peaked in 2018 edition of Takarajimasha's Kono Light Novel ga Sugoi! guidebook at the second position for bunkobon category while ranks #1 in the new work sub-category and the illustrator Shirabii in #8 for his work (co-credited with The Ryuo's Work is Never Done!).[1] In 2019 edition, the series reappeared at #5 and Shirabii at #1 for the respective same sub-categories.

At the time of manga's serialization announcement, the light novel had sold 250,000 copies in print.[2]

The anime was listed, by IGN, as one of the best anime of 2021 and Anime News Network's multiple writers listed the anime's first season as one of their favorite series from spring 2021.[3][4] In Crunchyroll the anime have a 5 stars classification and was frequently in top 5 for several weeks. On Myanimelist, the second cour was several times in top 3 of fall 2021 airing anime.[5][6]